I recently took advantAge of Old Navy’s sale and bought the kids some clothes. I loved this dress when I saw it online but I love it even more when I saw it in my hands. I had to put it on V right away and she looked to beautiful in it. 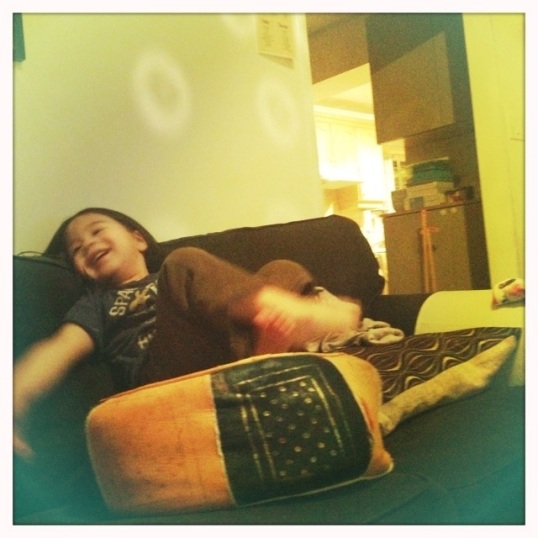 Z gets into his silly behaviours a lot. Today, he decided to put the poof on the couch and sit cross-legged. He was so proud of himself for accomplishing it. Of course when V saw it, she, too, wanted to do it.

(Btw, this is our 3rd New Year’s Eve that we will have slept through. In fact, M is sick with the flu and I’m just blogging and enjoying some of Michelle Phan’s YouTube videos. She is so good at what she does. One of my resolutions is to wear makeup more often to make myself feel better. )

This is how I found my three-year-old, lounging on the couch, playing on the iTouch. It made me giggle to see him like that.

V is very self-sufficient. She came to me, after helping herself to the cereal shelf on the pantry, asking to eat some cereal. I took the box from her and asked her to grab a bowl for herself, after which I poured some in it. Then she looked inside and started pointing in it, so I asked if she wanted milk, too, and she nodded. After placing her in the booster and snapping the tray on, she fed herself while I worked in the kitchen to put things away. What a good girl!